From our camp we crossed the river through thick riparian vegetation to the west side and scrambled our way onto Navajo slickrock slabs. A cairn was found-excellent, we hoped this was the historic Baker Trail and would lead us upwards out of Halls Creek and into the Stevens Canyon watershed.

Hiking up the slabs was superb with views opening out back to the Henry mountains again- already showing signs of snow melt since we crossed them a few days ago. Dammed Lake Powell (or Lake Foul as Li Brannfors had named it on his maps) appeared now to the south east, its low water levels revealing expanses of unnatural scrub plains. 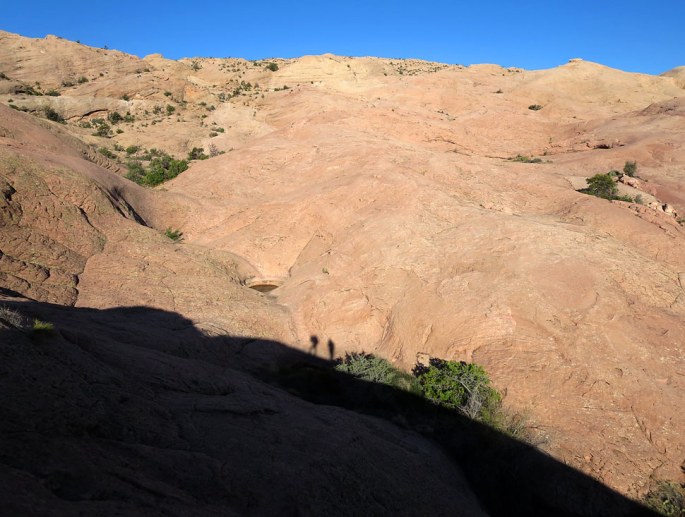 We soon lost the cairns and headed up south west. The terrain was complex though- domes of slickrock sometimes dropping steeply requiring some backtracking to weave a reasonable line up to the top. Occasionally we found another cairn but couldn’t see any continuation of the route so we just navigated our own way.

At the summit we had a short rest then descended south west looking for a way into Stevens Canyon. The top of Stevens has many steep ‘fingers’ and there was no sign of a route so we just picked a ‘finger’ and scrabbled down slabs using junipers for holds until we popped out into what looked like the main canyon.

Eventually we made it onto an easier beautiful wash bottom with lots of pink towers and steep canyon walls. Awwhhh, this was brilliant hiking down slabs with sensually sculpted potholes of water like a ‘string of pearls’. 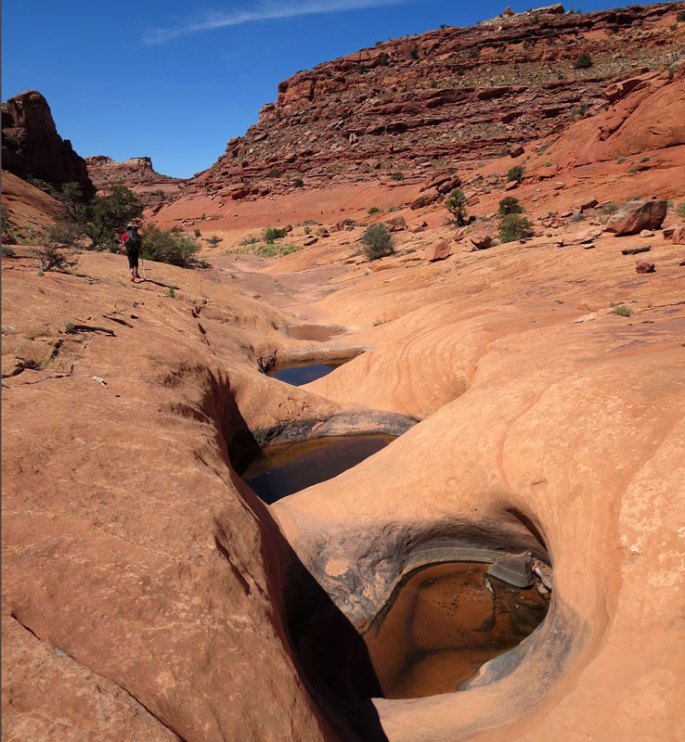 The upper canyon had a real wild feel so we were surprised to meet 3 hikers coming up canyon. We exchanged navigation and water notes and this gave us encouragement that there was a way through down Stevens to the Escalante river (we did have doubts!).

Sometimes we would be hiking the canyon bottom but we alternated to following the canyon sides on amazing slick rock shelves. On one of these we had to scramble over a boulder field sitting on the slab. Brian hopped off a freezer sized boulder onto the ground below between other rocks. The boulder rolled towards him just about pinning him against another rock but luckily jammed itself in. He was left with various gashes to thighs and arm. Martina emptied our somewhat frugal first aid kit and, along with duct tape and some spare clothing managed to patch Brian up. Even more luckily for him his injuries were just scrapes and bleeding rather than muscular or any bones and he could still hike, albeit a bit wobbly for the first hour or so!

Lower down in Stevens the hiking was through more densely vegetated canyon bottom with some wading through deep water pockets. Poison ivy made an appearance as well and was quite hard to avoid. About a mile short of the junction with the main Escalante river we found a marvelous camp next to a garage sized boulder serenaded by croaking frogs through the evening!

Despite the boulder incident it was a fantastic day through the best of scenery with varied challenging hiking. Some more images below…..

We aimed to make it to town today and were off at 7 am (early for us) in lovely early morning canyon light. Our canyon emptied into the larger Escalante and we follow this downstream for 1.5 miles or so. The water seemed to be running quite high with much thigh deep wading and the water temperature was COLD! Stunning hiking though in this world class area. The reflected light on the striped uniform sandstone cliffs was a sight to behold.

We passed 3 hikers sleeping in bivvy bags under Stevens Arch indicating to us that we were entering the popular Coyote Gulch area. Turning into Coyote Gulch itself we found it had quite a strong water flow and we had a rest to warm our feet up and change into dry socks.
Coyote is popular for a reason, as it has splendid scenery- mixing flowing water, lush green vegetation, awesome canyon walls and many natural rock arches. We kept to a fairly fast pace though, winding our way up the canyon hoping to make it to the Hurricane Wash trailhead dirt road by early afternoon to give us a chance to find a lift back the 30 miles or so to the town of Escalante.
The day heated up but the mix of shade and sun was ideal for us. Passing by campers at Jacob Hamblin Arch we looked up to see the scrambling route up the arches rib we had taken when last here in 2004.
Stopped to watch a raven returning to feed chattering chicks on a high rock ledge. Swirling fluff from the cottonwoods added a surreal edge to the day.
We exited out into Hurricane Wash which was smaller and pleasant but soon opened out into a dry, sandy, exposed hike to the trailhead.  Reaching the dirt road where we hoped to hitch, it was hot and windy and most disappointingly there were very few cars there! We hung around for an hour or so but lucked out as a hiker returned to his car and agreed to give us a ride to Escalante- hoorah!
In town, all the motel rooms were booked out for the night, so we camped at Escalante Outfitters and booked a motel room for the next night. Both of us were a bit tired, dirty and sore, so a rest was in order. After a shower we had a huge pizza and beer at the outfitters and met Micheal Geiss, the other Hayduke hiker we had heard of- the first we have met. It was nice to relax and exchange tales of our hikes from the last few weeks!

3 thoughts on “Into the Escalante canyons”