Thursday 6th October 2016 We planned to do a canyon loop around the Escalante river again but in a new area to us which we hoped would visit some of the finest scenery in the south west. In 2014 we visited the southern end of the Escalante river via Halls creek, Steven’s Canyon,Coyote Gulch and Hurricane as part of our Hayduke hike. This time we aimed to link up canyons to the north including Neon with it’s photogenic Golden Cathedral.

After coffee in the Burr Trail Outpost in Boulder, we drove along the super scenic Burr Trail for about 30 miles before turning south 10 miles down the Wolverine Loop Road on the east side. The road was a bit bumpy in places but we made it to a junction about 3 miles short of the hiking trailhead for Silver Falls Creek amidst big wide open vistas dotted with sage and pinyon-juniper. Here we sorted our gear out for 4 days and set off on foot down Silver Falls creek. We firstly followed a dusty jeep track to the actual trailhead for about an hour and from then just continued down the mostly dry stream bed surrounded by the colourful Chinle and Wingate rock formations. 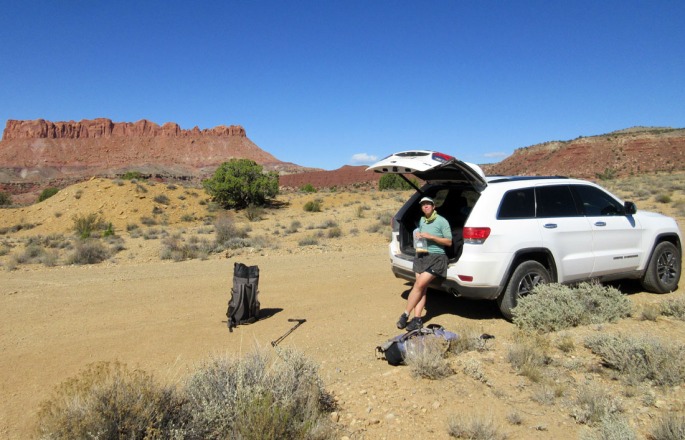 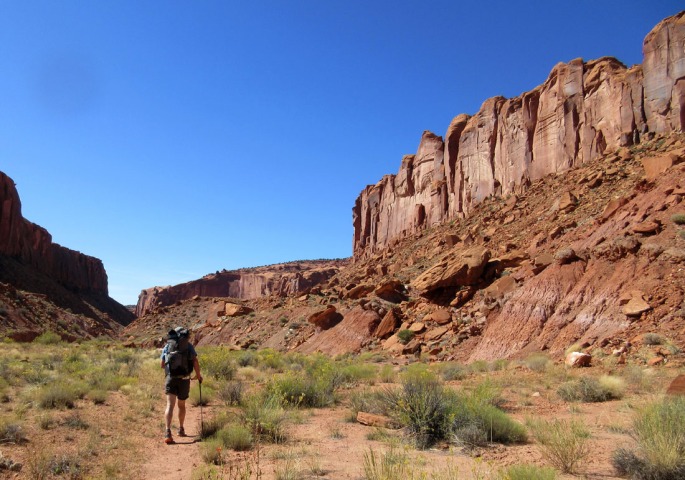 The sun was penetrating but the air was cold making for great hiking conditions. As we descended the canyon walls gradually closed in and meandered with the steep clean red wingate cliffs surrounding us. Although cross country, the hiking was pretty mellow following the canyon- allowing us to gaze upwards at the alcoves and streaked rock. 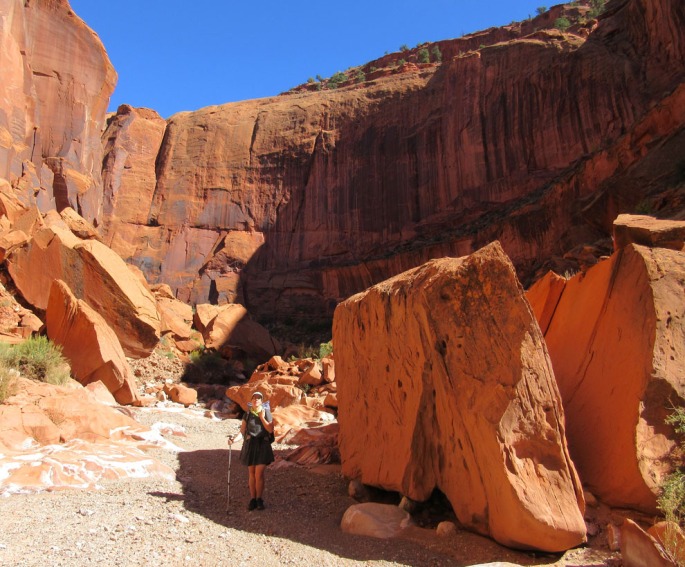 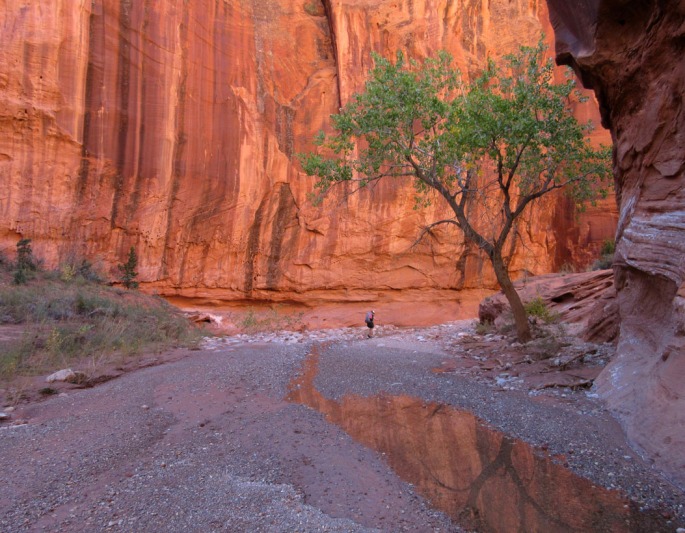 Some water appeared in the canyon floor from springs before we reached the greenery of the fast flowing Escalante river itself. We got lost a bit in the deep willow shrubbery before wading through the river to find Harris Wash on the other side. Lot’s of fresh looking flood debris around here made for tougher hiking but we eventually found a comfy flat sand bench above Harris Wash to pitch the tent…. 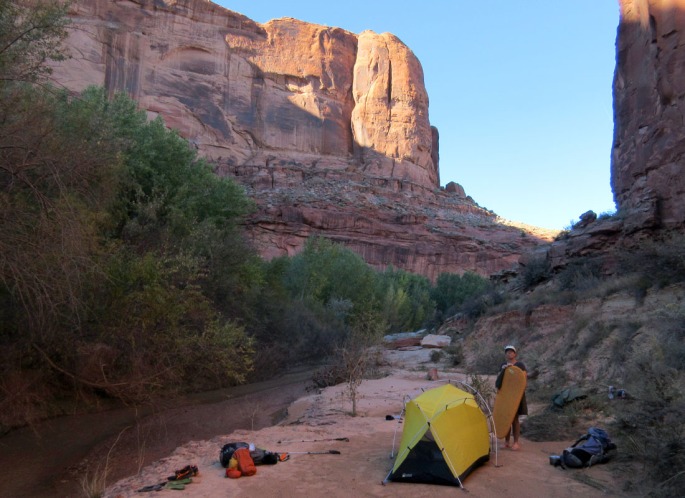 Friday 7th October 2016 A cold starry night and also a smelly one! We had a skunk pass by the tent during the night but by morning the smell had subsided (or maybe we had just got used to it!).

We left the tent pitched and explored up Harris Wash for the morning. Starting out, we waded up the calf deep wash which had frigidly cold water and it took a couple of hours before the sun crept over the canyon walls and warmed us up. The flood debris made for slow going but Harris had some superb deep alcoves and colourful walls. We didn’t see anyone here and only saw two other pairs of hikers in the four days we were out despite Harris in particular being described as a popular canyon.

Every canyon in this region has it’s own character- depending on the different rock layers, the steepness of the canyon, the amount of water, the size of the water catchment, the amount of sun exposure amongst many factors. It does make for incredibly interesting hiking as the view changes at every meander bend and there are constant surprises to be found! 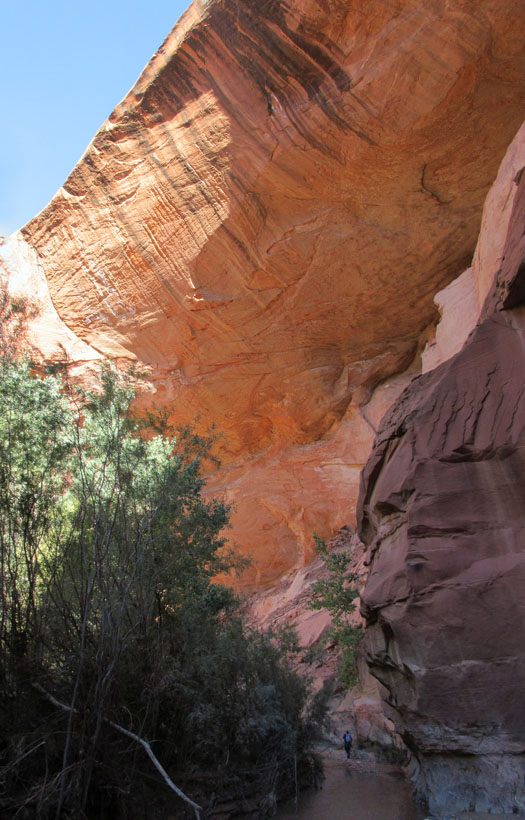 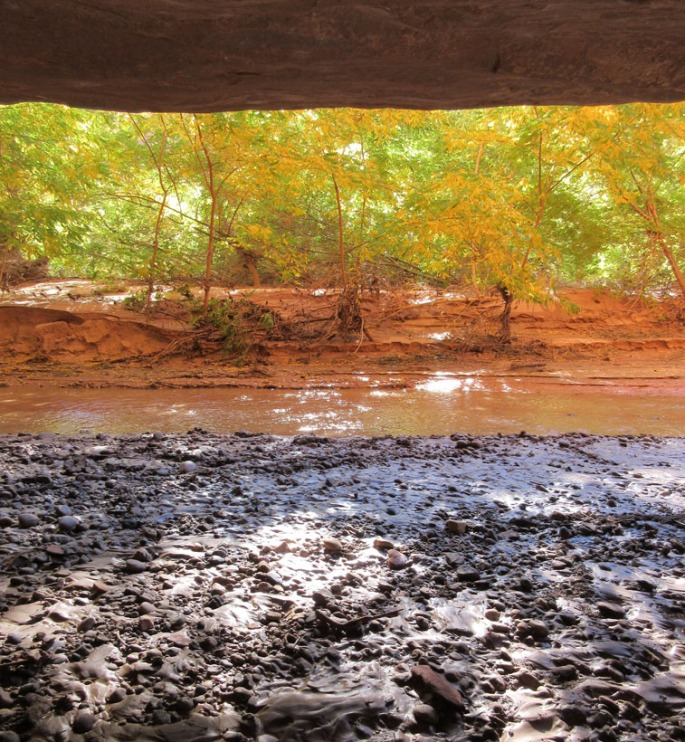 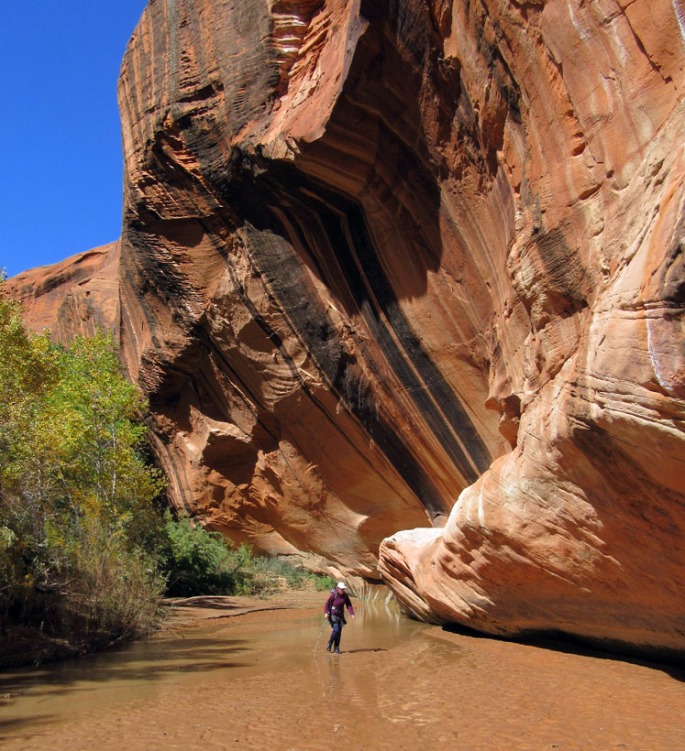 We saw some wild turkey on the river banks but our main feathered companions were ravens -soaring above us with their shadows flickering across the canyon walls.

We found a side spring with fresh water coming in from a side canyon on the south side of Harris. Here we tried to climb out of the canyon here on grainy slickrock but we gave up due to the slippy rock and the lack of holds! A raven monitored our progress….. 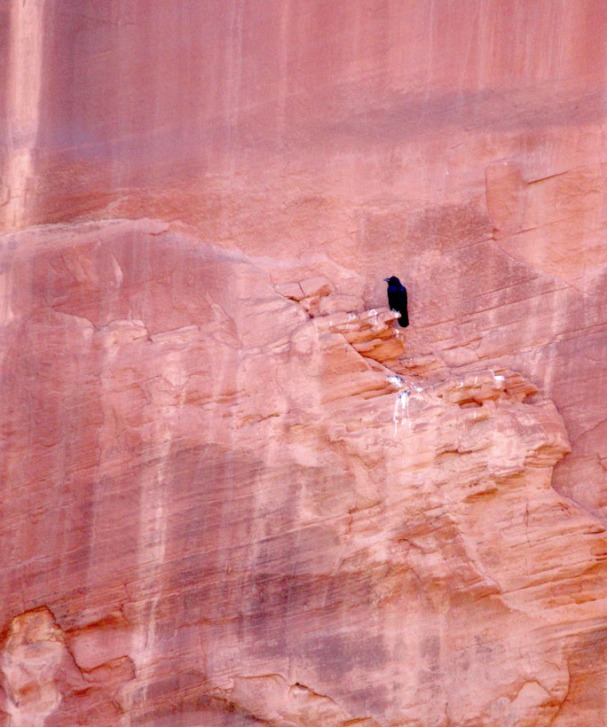 Soon after, we turned around and returned back to our tent for a mid afternoon lunch. The water and air temperature had warmed up making the return more relaxing. Our plan next was to pack up the tent and hike / wade down the Escalante river towards a side canyon called Choprock to camp there.

The Escalante river had a much larger volume than Harris and we had to criss- cross many times in thigh deep water. But it didn’t cause many difficulties despite the steep muddy river banks. Between crossings we hiked most easily on sage brush flats with faint trails and with more difficulty through willow and tamarisk scrub. The canyon here was roughly 500 meters wide and with deep red walls and autumnal cottonwoods it looked great.

We followed some big cat trails for a while, and it looked to us that it might be mountain lion- and quite fresh at that. 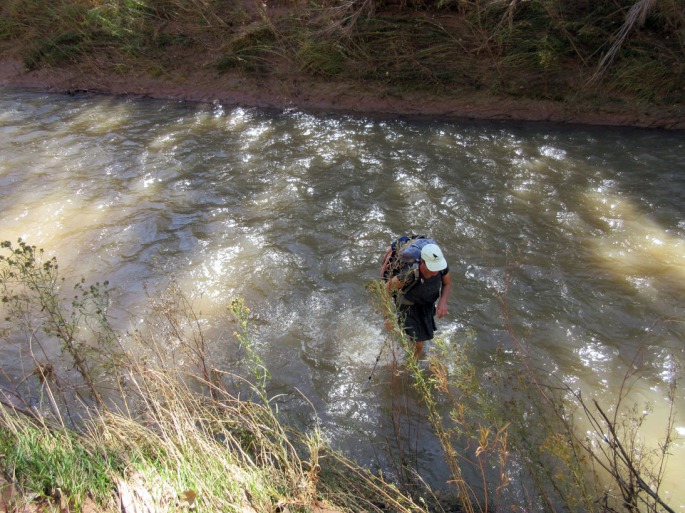 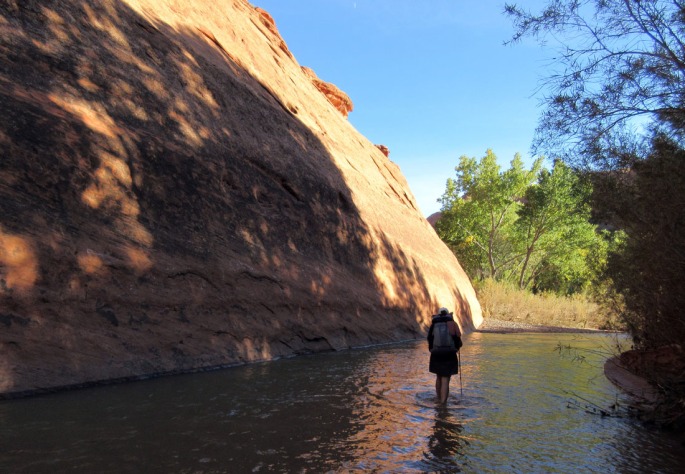 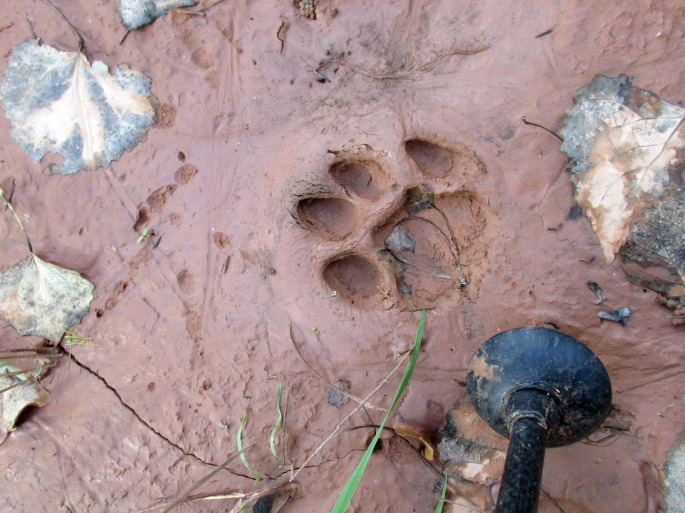 Eventually we made it down to Choprock canyon at around 6pm and set up camp in a pleasant open spot next to our ever present cottonwood friends! 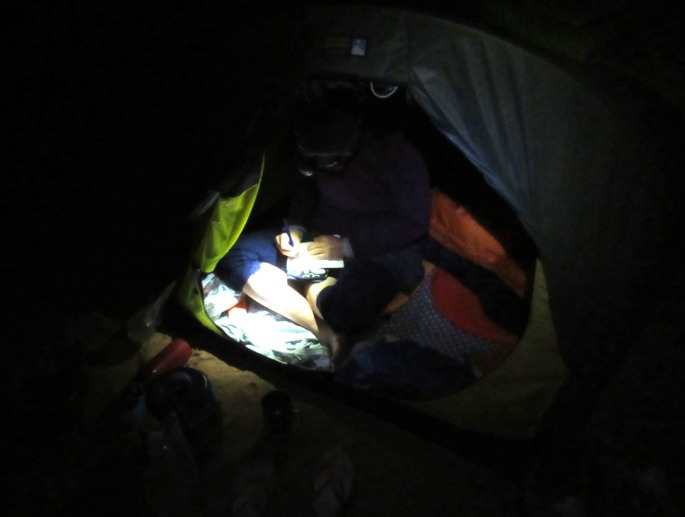 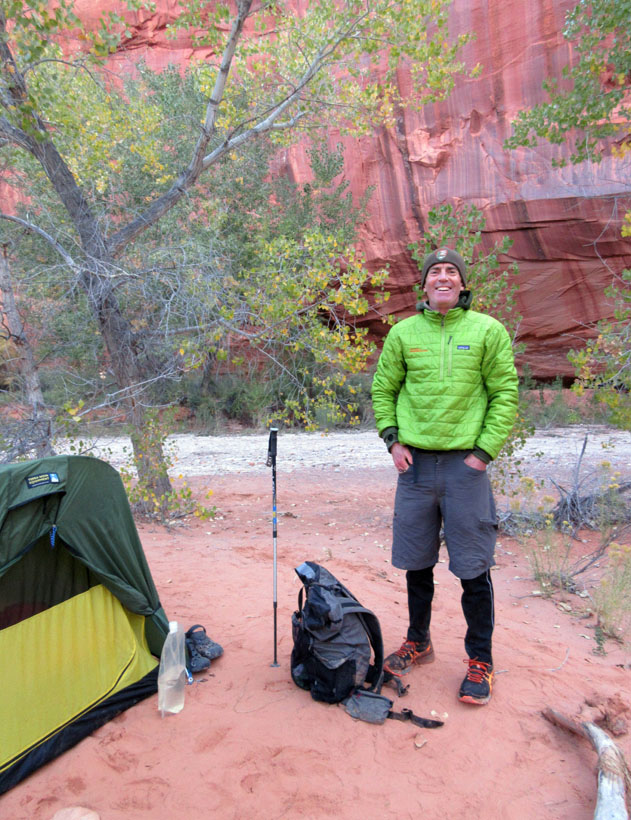 Part II of our backpack to Neon and up Choprock canyon is here..